This disease can be the reason for death so, we must know how it spreads and how to prevent it. 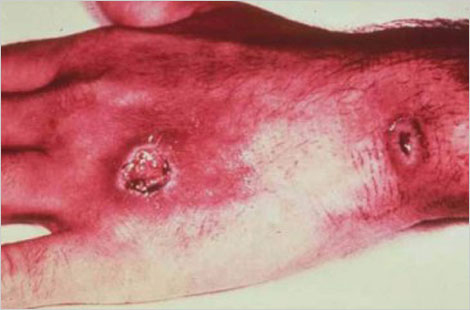 Till now no evidence states that this disease transfers from a person to person. Humans get anthrax through anthrax skin lesions, which may be contagious through direct contact, as anthrax bacteria enter the body through a wound in the skin.

Eating contaminated meat and inhaling can also be the reason for anthrax. Farmers are the most common victims of this disease.

This kind of infection enters your body through a cut or other sore on your skin. This is the most common route the disease takes place in humans. A raised bump with lots of itchiness, that appears like an insect bite which develops into painless spores with a black spot in the center of the bump.

Undercooked meat from an infected animal when eaten then this form of anthrax invades into your gastrointestinal system. As the disease progresses, a life-threatening inflammation of the brain and spinal cord known as Meningitis takes place.

Persons that are addicted to dope are more prone to get this problem as when they administered drugs through needles, which already are infected by the bacteria, it invades from one person to another. Signs of this disease are swelling and redness in the area where it occurs.

In Ayurveda, it is described that when air, water and time, all the 3 gets affected, they form an epidemic, due to which animals get affected first.

Ayurveda`s belief is that the cause of the epidemic is unreligious behavior like war. During war weapons of chemicals as well as weapons of biological type are used which is the cause of polluting the atmosphere and cause epidemic outbreak, thus disease.

Symptoms of Anthrax in Ayurveda

Stratos imbalance In Raktawaha, the reason is eating stale purified food in which it can cause skin diseases and pustules.

which is due to heavy and not easily digest able foods, ingestion due to which whole digestive system suffers is the reason for the development of Manswaha strotas problem in a person.

Herb’s Used for the Treatment of Anthrax

Neem is a herb known for its antibiotic, anti-fungal properties, which helps us in getting relief in Anthrax.

Few leaves of neem when boiled in water and taken empty stomach in the morning is a good way to get rid of infections.

Tulsi, which is a holy herb also one of the proven herbs to get rid of many diseases.

Dried leaves of this herb can be converted to powder and if taken twice a day with milk is preferred by Ayurveda for better immunity, hence the best treatment for Anthrax.

Its Natural antimicrobial agents can be used in combination.

It acts like a great antibiotic that’s why a special place in Ayurveda and in the herbal remedy is known to be proven a remedy for diseases. Especially of disease which is due to bacteria of harmful nature.

In a glass of boiled milk add half spoon of turmeric in it and drink it 2 hours after meals.

Both these herbs are known for the best antibacterial problems.

Add honey in a quarter teaspoon full of black pepper and have it thrice a day for 7 days, which is the best result for Anthrax disease.

It’s a good antioxidant which helps to get rid of bacteria and virus; it helps in flushing the toxins from the body also and boosts the immunity.

Just simply drink it twice or you can drink it thrice also daily as long as you want to drink it for 1 month to 2 months. It is preferred you can continue to your further uses also.

Loaded with anti-bacterial properties and prescribed for many diseases in Ayurveda ranging from the common cold to Nausea, its good for Anthrax also.

Some chopped slices of ginger when boiled in water, after cooling it at room temperature, add some honey to it and drink it twice daily, best antibiotic remedy for Anthrax.

Antiseptic anti-viral and best for thinning the blood is one of the best antibiotics, that’s why Ayurveda recommends it for Anthrax also.

Take 2 to 5 pods in the morning preferably with honey, if taken empty stomach it can give better results.

if you are facing this health problem or any other health problem and you want to consult with our ayurvedic doctors.  you will sign up for our website, It is totally free.

*Ayurveda Experts can sign in with their email id registered on consultant portal.